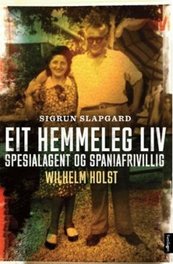 When the Spanish Civil War broke out, the Norwegian businessman Wilhelm Holst lived in Paris. Shortly after he turned up as a casket-bearer and a volunteer for the republicans at the frontline in Spain. After the fascists had declared victory in Spain, Holst helped refugees escape across the French border. When Hitler’s troops invaded Norway, two of his sons, were shot and killed at their home. From that moment on Wilhelm Holst risked his life daily through his work for the French Resistance Movement.

Shortlisted for The Brage Award, best Non-Fiction Book 2020:
A captivating story about the unknown Norwegian resistance fighter Wilhelm Holst. He worked for both the British Secret Intelligence and the French Resistance Movement during the 2nd WW, and he helped smuggle hundreds of refugees and saboteurs out of France. For his efforts he was decorated with the Medaille de Resistance and invited to lunch with General de Gaulle. The fact that the protagonist lived a secret life, makes the story exciting itself. Several times Holst was close to being discovered by the Nazis. The author lets us also participate in the investigation into the secret life of Holst. The reader is taken on a journey of exploration in search of sources and historical leads in several countries.

The author speaking about her book:

Writing this book I have been deeply moved by the unexpected actions of a Norwegian civilian living in wartime Europe.

My name is Sigrun Slapgard - I am an international war reporter and a writer, and

I write both novels and documentaries.

When the Spanish Civil War started he made a drastic choice when he volunteered to travel to the front  - with three British ambulances – joining the struggle against Franco and his fascists.

during the Second World War.

Then his life was for ever changed – his two minor sons were brutally shot by the Nazis.

After this he became an even more fearless agent, risking his life on a daily basis - operating together with the British agent Madge Addy. In secret papers I found that she often traveled with false documents, posing as his wife.

Wilhelm Holst was an agent unlike others, and his story completely unkown until now.  My hunt for the truth about this secret life has been as exciting and chocking as his life was.

It is a story speaking strongly to us today, I believe.